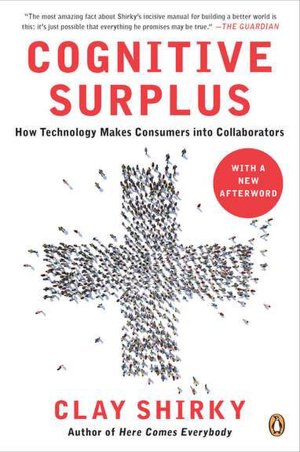 Did you read Shirky's first book Here Comes Everybody? This book is basically its unofficial sequel. While HCE discussed how technology is enabling people to create organizations and movements via social media, this book focuses instead on the power that this same technology gives the average person to both be a media creator (rather than just consumer) as well collaborate in new ways with others.

Shirky claims, rightly so in my opinion, that we're in a media revolution of the same magnitude as the invention of the moveable type printing press. The internet, smart phones, computers, social media, and the like have all lowered the bar for creating and distributing content. In addition, they've also made it exceptionally easy for people to collaborate regardless of location, occupation, or traditional hierarchies.

He spends this book outlining how these lowered barriers for content creation combined with increased ability to collaborate is allowing us all to pool our combined knowledge and build on it in ways that would have been previously impossible. He also breaks down the "hows, whys, and whats behind cognitive surplus" and walks through the wide variety of content it's created, from things as inconsequential (but fun) as memes to accomplishments as important as civic movements.

The organization of the book content is incredibly tight through most of it. The tail end of the book, though, reads like it was just a collection of the leftover snippets of info that didn't fit neatly into the previous chapters but were too interesting to leave out. It's not bad content, but the randomness of it compared to the tidy order of the rest of the book is a bit jarring.

Do you already participate in Twitter chats, edit Wikipedia, record your own YouTube videos, collaborate via Google Hangouts, or have an online personal learning network?  Chances are you already know the basics that Shirky is covering here. It's still worth reading this book though, if just to give you successful examples to share with others.

In addition, while this book is an enjoyable read for experts, it's also quite accessible to people who don't know much about online collaboration as well. That's a huge plus as far as I'm concerned.

Email ThisBlogThis!Share to TwitterShare to FacebookShare to Pinterest
Labels: review