Day Two of the conference featured absurdly good weather, yet again. Seriously, it is making me so happy to not be wearing a big, bulky coat (and, even with that, STILL be freezing to death). *sigh* I don't want to move back to FL anytime soon, but it's definitely great to visit at this time of year.

1) General Session- Big Data Demystified for Learning: What's Important, What's Not, and What's Next
Speaker: Douglas Merrill
I feel like most conferences have at least one session these days that focuses on a buzzword topic (not a complaint, just an observation). So this was our LSCon trend topic session: big data.

Big data is something we hear about constantly, but often without much context other than "Look at all the info we can capture! More info must mean we'll do better at _____." But Merrill made the point that there's no guarantee that'll actually happen. In fact, he made some very sensible challenges to the idea that big data is an automatic game changer.

On one hand, big data isn't this magical, mystical thing it's sometimes made it out to be. Many people get stressed out at the very mention of the word "math", and so they buy in to this religion of data because it's a way of dealing with the potential for data and math to help us, without going into the actual details of how exactly it can do that. You don't have to understand the data... you just have to have faith that it works.

Except there are so many ways to manage and interpret data, so if you don't understand how that process works, you're going to just mangle what all your data actually means. Be aware of how outliers can warp results in weird ways. Acknowledge that data isn't independent, it's always connected to other factors ("No data is an island..." *laugh*). Understand how the real world can be messier and more chaotic than mere data can represent.

Or, to summarize, ignore your anxiety and go take a great Stats 101 class (seriously, stats is the best kind of math for people who hate math)!

On the other hand, if you can learn to interpret data properly, it can empower you to do some fantastic things. It allows companies to pay better attention to what their customers are actually doing, not what they think they're doing. For instance, take the music industry back when they were in the early days of dealing with pirated MP3s. They thought the solution was to sue the people who were illegally downloading the most of their music. But, as it turns out, these exact same people were also the users who were spending the most on legal downloads as well. Talk about shooting yourself in the foot instead of looking at the bigger picture. Now, this doesn't mean you only listen to what your customers want and do. That mindset gets in the way of innovation (sometimes customers can't actually conceive of the new thing they might someday want),. That said, it's definitely worth paying attention to data for interpreting what your customers are actually doing.

Crowdsourcing is another angle on using big data smartly. Done right it allows you to use a wide array of sources to do things as different as building a spell correct system for Google searches or hiring more effectively.

At the end of the day big data isn't the magical solution that some people think it is, but if you use it smartly (and stop being so darn afraid of math) it can be more effective than skeptics would lead you to believe.

So overall the session was enjoyable. However, there was one thing that, while it may have seemed small to others, stuck out to me. Merrill made this crack during his talk about the CEO of Zappos and what exactly it said about him that he spent so much time around women's shoes. I'm sure he wasn't intending to be a jerk, but, you know, that's not the kind of comment that would be likely to make a transgender Guild member feel particularly welcome. It's more often the repeated little things, like those kinds of jokes, that make people feel like they're not a part of a community and I would have thought a lot more of the session had that one thoughtless joke not been there.

2) Doing Things With Words: Words That Work in eLearning
Speaker: Lisa Russell
In this session we talked about the nuts and bolts of the words, phrasing, and sentences we choose to use in our training.

Words, even a small number of them, have the power to move people. Take, for instance, Ernest Hemingway's famous 6-word story:
"For sale: baby shoes, never worn."
It's just a few words, but because they're so cleverly chosen they can still stir a surprising amount of emotions.

And yet, when most people write they pad out their content, using filler words and sloppy sentence structure to convey information clumsily. But in training, we don't have the luxury of letting our writing meander. If you don't grab people in the first few words, you may have lost them for good. So you need to make your prose snappy, and you need to figure out what your specific audience will actually respond to.

So how can you fix this? First, pay attention to your phrasing. Arrange your words for emphasis, keeping in mind that the first and last words in a sentence will get special attention. Next, don't be a word hoarder by padding your writing with filler words. If you can't tell your information simply, you don't know it well enough. Also, use active, not passive words. Passive language kills the action in what you're writing.

Finally, use the framework of the MEAL plan to balance your paragraphs:

M: Your main idea
E: Your evidence
A: Analysis
L: Link back to the main idea or lead out to the next one

Keeping these tips in mind can make your writing clear and concise.

3) Best Practices For Enlivening the Virtual Classroom
Speaker: Pandora Bryce
You know what's a bizarre but amusing experience? Live tweeting a session lead by a coworker where she's presenting a case study involving your own workplace. Not bad... just a bit surreal. *laugh*

Bryce used this session to talk about two aspects of virtual classrooms (VCs): a summary of some of the ways we use VCs at BMO Financial Group and a selection of VC roadblocks (plus suggestions for ways around some of them).

So, for context, we run about 110 VCs per week at BMO and have 50+ certified VC facilitators. That is a lot of VC content. On the plus side, VCs have no travel costs, don't require a physical classroom, enable broader access to training, have features that are difficult/expensive to replicate in classrooms, allow anonymous knowledge checks, make it easy to capture questions and output, and are, no surprise, relatively cheap. On the other hand, all of them suffer from the same problem: it's a challenge to maintain learner attention.

So there are a few VC best practices that can help attract and keep people's attention in them: 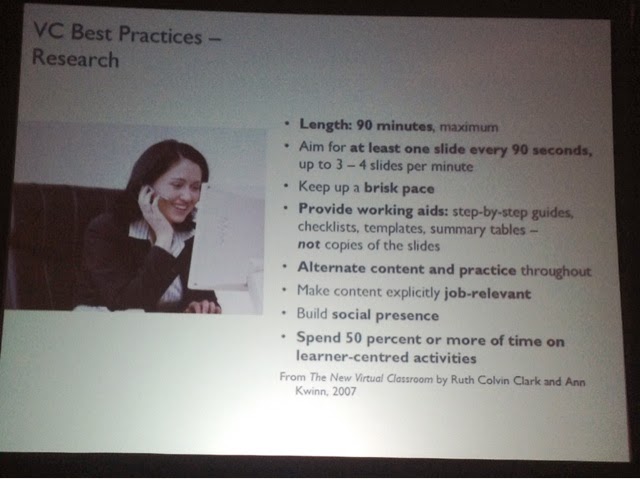 Bryce then followed this with a description of two programs at BMO that use VCs in engaging ways, one for Customer Service Representatives (bank tellers) and another for first time leaders. In both cases the VCs were just one part of the program, with eLearning, manager 1-on-1s, and group work (obviously done via conference calls) included in the overall experience. The VCs themselves were used not for basic content that was explained by a talking head, but instead for facilitated group discussions and debriefs on the more complex, grey areas of the content. And using VCs for discussion and talking through tricky issues tended to get people to buy in to the learning experience substantially more than just asking them to put on a headset and listen to a live lecture.

As for VC roadblocks (and a few suggestions for solving for them), Bryce mentioned 3:


If you can figure out your own team's solutions to these barriers, it makes running VCs much easier.

Obviously I'm not going to review my own talk. However, I am going to to do the "share your work" thing and give you a link to my session resources page. It's got links to all the tools I talked about in this session (plus a few more I thought were worth sharing), the session slide deck, and my full speakers notes.


And this has turned into yet another terribly late night for me. So I'm going to keep this wrap up short by saying this conference continues to be excellent in all ways.
Posted by Bianca Woods at 12:08 AM