Conference Tips: Vegas for people who don't like Vegas

Lots of people get excited about an excuse to go to Vegas. I most assuredly am not one of those people.

I'm not much for drinking or partying, I don't gamble or smoke, and I'm not even great at staying up late. The supposed charms of Vegas are pretty much lost on me. And yet, I find myself there at least twice a year these days thanks to the rather spectacular L&D conferences that happen in that city.

So if you're like me and find yourself there in spite of not really liking the place all that much are you stuck just trying to tough the days you're there out and counting the minutes until you get to go home? No... not if you don't want to be. Turns out there actually are some fun things to do in Vegas even if you aren't terribly keen on the typical Vegas experience.

Cirque du Soleil shows
Even if you're not interested in your standard Vegas offerings, checking out one of the Cirque shows in town is definitely worth your time. They're all spectacular, but in a way that doesn't feel in your face the way a lot of the rest of Vegas can (my personal favourite is KA). Also, if you're willing to wait until last minute, you can often pick up significantly reduced Cirque tickets from the multitude of Tix4Tonight locations along The Strip.

Shark Reef Aquarium
If you need a chill break from all the noise and bustle, this aquarium at Mandalay Bay is absolutely worth a visit. Also, if you're here around Halloween they dress the entire place up like a haunted house and let kids trick or treat throughout the exhibits. It's the most adorable, least Vegas, thing you'll find on The Strip. 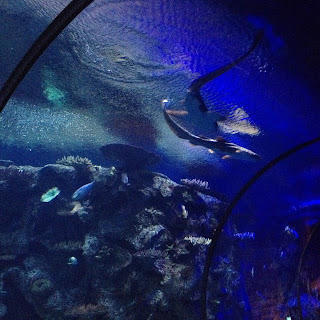 Secret Garden and Dolphin Habitat
Another aquatic option can be found at the Mirage. It's small, and I'll admit I have a preference for the Shark Reef over it, but it's still worth checking out as the dolphins are absurdly fun. Case in point:


The Top of the World Restaurant
The Stratosphere is just far enough from the main section of The Strip that you'll probably want to take a cab here, but it's totally worth it if you don't have any issues with heights. You'll get a spectacular view of Vegas and the surrounding area in a relaxed and calm environment. Also, the food is quite good as well. It's a bit pricy, but the last few times I've been there they had a great prix fixe menu at lunch that's really decent bang for your buck.

Downtown Container Park
If you want an experience that's pretty much the opposite of your stereotypical Vegas expectations, try checking this place out. It's a charming shopping and dining area made out of repurposed shipping containers. It's also home to the coolest praying mantis sculpture you'll ever see. Seriously, I love this place.

Do your sight seeing early
If you want to see the strip but without the crowds, do it early in the day. REALLY early... I mean, "before you go to your conference in the morning" early. If you pop out for a walk super early in the morning there are way less people around (and, bonus, almost all of them are relatively sober). If early morning doesn't work for you, then your next best bet is to check things out earlier in the week. Seriously: The Strip seems to hit Drunk o'Clock a bit later in the evening on Mondays and Tuesdays than it does on, say, Friday. Use that to your advantage.

Leave The Strip entirely
This area is not just defined by a stretch of casinos. I've not done this myself, but lots of people tell me that, if you have the extra time, it's well worth getting off of The Strip and seeing what else is in the area. There's quite a lot of good hiking around here and don't forget that the casinos are just one small part of what makes up the city of Las Vegas.

Look for fun food you can't get easily back home
Vegas food runs the gamut from "as much volume as you can ingest... and some" to "so expensive you'll need to eat ramen for the rest of the year". But in between those two extremes is some reasonably fun, not horrifically priced eating adventures. Vegas is home to bizarre but amusing stunt food, like the lobsicle (I kid you not, it's a lobster tail on a stick... and it's actually tasty). It's also a place you can find pretty authentic treats that you might not have as easy access to at home. For instance, the Jean-Philippe Patisseries at the Aria and the Bellagio have surprisingly spot-on croissants and Amorino at The Linq makes gelato that's both beautiful and delicious. Now, I skew hard towards desserts, but whatever style of food you're craving, you have a good chance of finding a great iteration of it here. 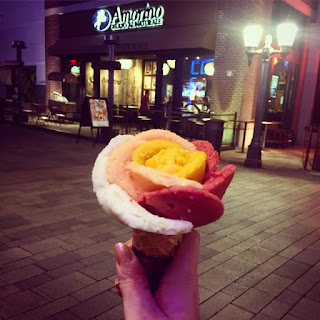 Pick up groceries at one of the many drug stores along The Strip
If you want a quieter experience, there's no need to go out every for every meal. The numerous drug stores in Vegas carry way more than just cold meds and shampoo: they also stock a decent amount of food as well. When I first visited Vegas I was surprised to find you can pick up some reasonable food basics at these stores, including fresh fruit and vegetables in some cases. It's incredibly easy to put together simple breakfasts from what you can find here and make it so you can spend just a bit more time relaxing in your hotel room (and avoiding the casino floors). And as long as you're okay with nothing fancy, you can even pull together lunches or dinners from what's available here too. particularly if you picked out a hotel room with a kitchenette.

Just chill in your hotel room
There is no rule that says that just because you're in Vegas for a conference that you have to go out afterwards. You're a grown up and if after a long day stuffing your head full of knowledge you just want to head back to your room to read a book, watch a sports game, or binge on Netflix, then that's absolutely what you should do.

So those are my personal suggestions for making Vegas more bearable for people like me who would pretty much rather be anywhere else. Do you have any tips of your own to add? Be sure to pop them in the comments below.