It's really time for me to start blogging again, and what better way to restart than with a review of the book I just finished! 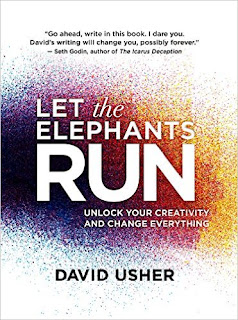 When I was growing up David Usher was mostly known as the lead singer of the Canadian band Moist. In the subsequent years he's also built up a rather interesting reputation as a speaker on how people can become more creative. This book takes the core ideas from his talks and expands on them even further.

Are you someone who loves the idea of creativity but doesn't always think of themselves as a creative person? Well then, this book is for you. Everything Usher says in this is meant to help you see that creativity is a skill anyone can build. Through a bunch of mini essays (think Seth Godin length, but in a layout with better graphic design) he expand on the many reasons people believe they aren't creative and the steps and activities they can use to strengthen that skill and use it in a variety of ways.

If you know me or have heard me talk, you know that I absolutely agree with Usher's approach here. Many people have told me that they think creativity is just something you're born with, not realizing the years of practice, experimentation, and just plain willingness to keep going even when you suck at first that has made the people they admire seem just naturally outstanding at coming up with new ideas and approaches. Usher does a fantastic job at pulling back the curtain and showing readers all the sweat and effort that goes into building your creative skills. It's not always pretty, and Usher doesn't romanticize it in the slightest.

What he does do, though, is break down many of the processes people use to spark their creativity and show the reader that this is something that they too can learn how to do with time and practice.

Are you someone who already feels confident in their creativity? Then you're probably not going to get much out of this other than a feeling of solidarity with Usher. It's not a waste of your time (and can be a nice way to inspire yourself out of a creative rut), but you were never the intended audience for this book. Maybe buy it as a gift for someone else... like the next person who tells you "Oh, I really just can't be creative like you are."

Also, be aware that the chapters in this are short. I mean, REALLY short. They're much more like reading a bunch of mini articles than a typical book. If that kind of writing frustrates you, this might not be the book for you.

I am overwhelmed with how beautiful this book is. Normally that's not something I would mention in a book review, but it feels well worth mentioning in this one case. A book on creativity should use every tool imaginable to help inspire you, and clearly that idea fueled the graphic design and layout of Usher's creation. Just flipping thought this thing can be enough to help you feel excited about coming up with new ideas.

I've got you covered (Well, at least if you live in North America):